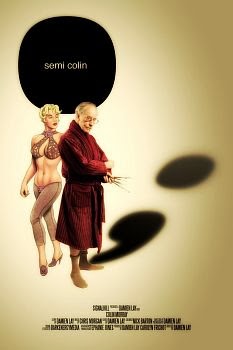 The aptly-titled SEMI COLIN (2012) is a semi-documentary, semi-biography that's also sort of a semi-piece of cinematic art by filmmaker Damien Lay which uses reclusive graphic illustrator Colin Murray as his medium.

Born in 1943 in the very same modest English flat in which he still resides, the solitary Colin's austere existence gives scant indication of the overwhelmingly robust fantasy life that roils feverishly within his mind.

And neither, at first, does Lay's film, which takes a full ten minutes just to get Colin out of bed and into the bathroom for a morning leak.  And another ten minues to begin giving us clues as to what drives Colin to get out of that bed every morning.

Till then,  Lay seems almost determined to make our viewing experience boring in a cutely odd sort of way, and then dares us to be bored.  Hopefully you'll enjoy the plaintive piano stylings that accompany the largely static images of Colin shaving or sitting in the bath puffing on his ever-present hand-rolled cigarettes.

Finally he sits at his humble drawing board--really just an old  desk crammed into a small room--and we get to see glimpses of his meticulously-rendered sexual fantasies put to paper.

Colin labors over these painstaking drawings, done in paints and colored pencils, as we watch them take shape into the sort of heady adolescent-style sexual fantasies that Colin says began during his formative years and never went away.  His work is lavish, colorful, and  extremely eye-pleasing, recalling the styles of artists such as Eric Stanton and Bill Ward and the naughty adventures of Harvey Kurtzman and Bill Elder's "Little Annie Fanny."

During the several formally-staged reflective moments in the film (in which Colin sits in his robe in an overstuffed chair under a "Citizen Kane" shaft of light) he talks of obsessing over the act of drawing what he wants to see rather than what he sees, and how fulfilling it is to achieve what he considers to be an ideal rendering of the female form.

Some of this narration rather states the obvious: "I like to do drawings that have a story to tell...in what is known as sequential art."  (In other words, he draws comics.)  He gives us little biographical detail--his statement "I recall being a young man..." trails off into silence.  We learn mostly about his early fear of discovery while furtively drawing away in his room as a boy, ever-wary of his mother's footsteps outside the door.

The DVD from Shelter Island is in 3:1 ultra widescreen with 2.0 stereo sound.  Extras consist of a director's commentary and a three-minute montage of Colin's work set to composer Chris Morgan's energetic film score.

The further along SEMI COLIN went, the more I warmed up to the rambling, oddly-told story of this elderly artist living inside his own fantasy life while existing in the most unremarkable surroundings.  Is he happy?  Damien Lay doesn't really delve into Colin's psychology himself, but rather gives us all the clues and lets us draw our own conclusions.

Buy it at Amazon.com


Suka artikel ini ?
This entry was posted in on 18.27 by Bari Jundi